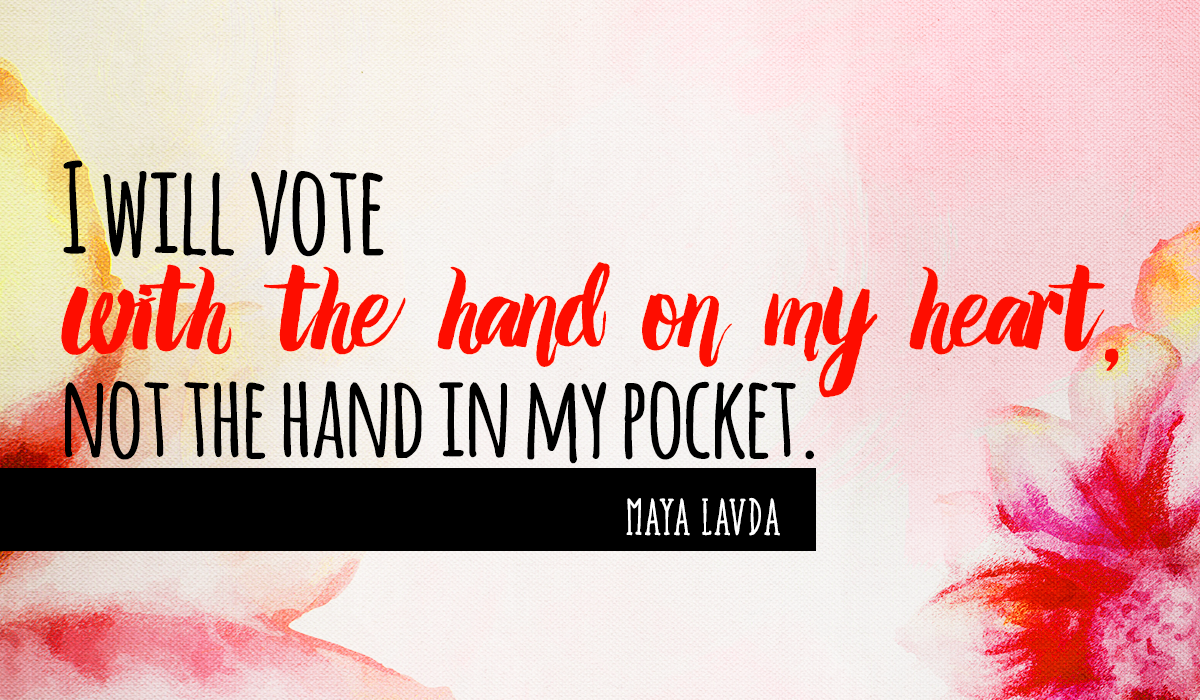 My dear friend—you who are voting yes tomorrow,

I’m sorry I cannot share your point of view.
I respect your opinion, but it brings tears to my eyes, a herald of the decline of values and ideas which you and I have been brought up with, all for the sake of the technocrats’ dominion.

It pains me that my bank account is elevated to be the supreme good for which I should strive. It’s a distortion of reality and it crushes me.

I do not accept that the big YES (to all the irrational and arrogant terms set by the creditors) will restore my honour and my dignity, nor that it will help me live a better life.
Because -in my opinion- decency has nothing to do with someone being poor or wealthy. Decency is a non-monetized value.

The law of the jungle does exist, I know.
But I will never stop fighting it tooth and nail.
From whatever position life enables me to do so, I will fight it.
And it will be my persistence, like water, that eventually carves the rock.

There is no need to try and convince you with arguments when you say to me “Okay, you may be right, but you don’t have the power. You’re a little dot in Europe and you can’t make any claims.” Rationales are worthless anyway, when we read report after report about how the creditors have imposed, and insist on imposing, a never-ending downward spiral from which we will not be able to escape. But because the strong and powerful creditors, for their own reasons, want it so, then we have to accept the irrational.

The Referendum question has been twisted from YES or NO to a dead-end solution, to YES or NO to staying in Europe.

But think for a moment—If they weren’t afraid of my NO and your NO, they wouldn’t bother so much about what you and I would vote. They wouldn’t engage in an endless struggle to shift public opinion with intimidation and propaganda. They wouldn’t be outraged. They wouldn’t let their democratic mask slip, telling us to change our government because they don’t like the one we have.

I was born in a blessed and at the same time a cursed country.
In a country with ‘heavy’ history and ‘light’ present.

I was born in the country of Elytis, Ritsos, Kalvos, Seferis, Cavafy and so many others.
When I read their writing my soul opens wide to the universe. It grows wings and flies.

I want to remind you that those who resist the powerful—the dreamers, the idealists, the tweaked—it is those that history remembers.
It’s from those who defied fear and the powerful that others draw strength and inspiration.
And thanks to them you and I are not still slaves.

My dear friend, I want to keep on dreaming.
I want my choices to be driven by my dreams, not by my fears.

I will vote with the hand on my heart, not the hand in my pocket.

For the first time in my life I am given the opportunity to do something better than vote for politicians I don’t like, and participate in a political landscape which I abhor. For the first time I am given the opportunity to prove that the principles with which I grew up, of truth, solidarity, democracy, justice, pride and dignity finally have some value.

To tell you the truth, it doesn’t seem such a great sacrifice and as difficult a dilemma. To me this choice seems easier than if I had to actually choose between prosperity and poverty. After all, they say we have already gone bankrupt as a nation. Difficult days are coming, days that will be even more difficult than those we have lived until now. You know it, we all know it.

With a ‘YES’ or a ‘NO’, decisions have already been made for us. If the powerful do not want to negotiate on a rational basis, they will not do so with a YES. They will attribute the hardness of their positions to the results of the referendum, telling us that we are to blame. In fact, they already have.

In one way or another, with a YES or a NO, we are all going to boil in the same cauldron. The question is how we enter the cauldron. I choose to jump with my wings wide open so that, perhaps, I might be able to fly out.

So, what do you think?
Will you join me?
Will you dream with me?
Will you believe that we might as well shake up the universe a little?
Don’t you have the curiosity to see what will happen if we will not, like contemporary Trojans, freeze up with fear and scurry around the walls, trying to save ourselves while running away?

Maya Lavda is a designer, artist, writer, follower, leader, thinker, dreamer, observer, reader, joker. Above all she is a life lover and explorer! She likes to fly like a bee, from one project to another, as she finds interest in many things in life. Time is never enough. Tasting creativity and trying to do only the things that makes her soul happy. Recently moved away from the big city of Athens (Greece) in a cute house with a wonderful garden, 500m from the sea and enjoys freedom and living in nature. wocado is her latest project, while maintaining a well established advertising studio in Athens. She is also the designer that visualises almost all our DFYNorm projects and ideas.